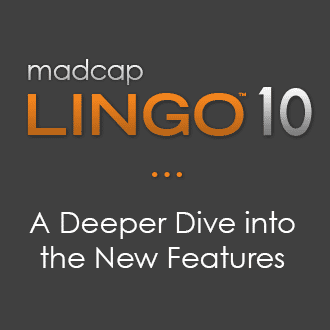 A Deeper Dive into the New Features of MadCap Lingo 10 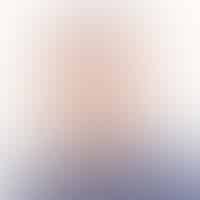 With the new release of MadCap Lingo 10, we’re excited about all the new features and enhancements that make MadCap Lingo one of the most powerful tools available for authors and translators. MadCap Lingo has always been designed to seamlessly import files and create multilingual outputs, creating content ready for diverse audiences. And with the new updates, managing the translation and localization workflow has never been easier.

Want to learn more about MadCap Lingo’s new features? Here’s some of my favorite features that make managing the translation and localization workflow a cinch:

In previous versions of MadCap Lingo, we’ve always tried to provide a solution for authors to easily isolate what needs to be translated. And in MadCap Lingo 10, we take this idea to the next level. You can now dynamically filter a source project by targets or conditions, giving you greater control over which content to translate. Content can be selected and filtered at project creation or any time during the course of a project through the dynamic filtering option. For users that are working with Flare content, MadCap Lingo 10 will now pick out and display segments that are relevant to the selected target or condition, allowing you to see only the segments that need to be translated. 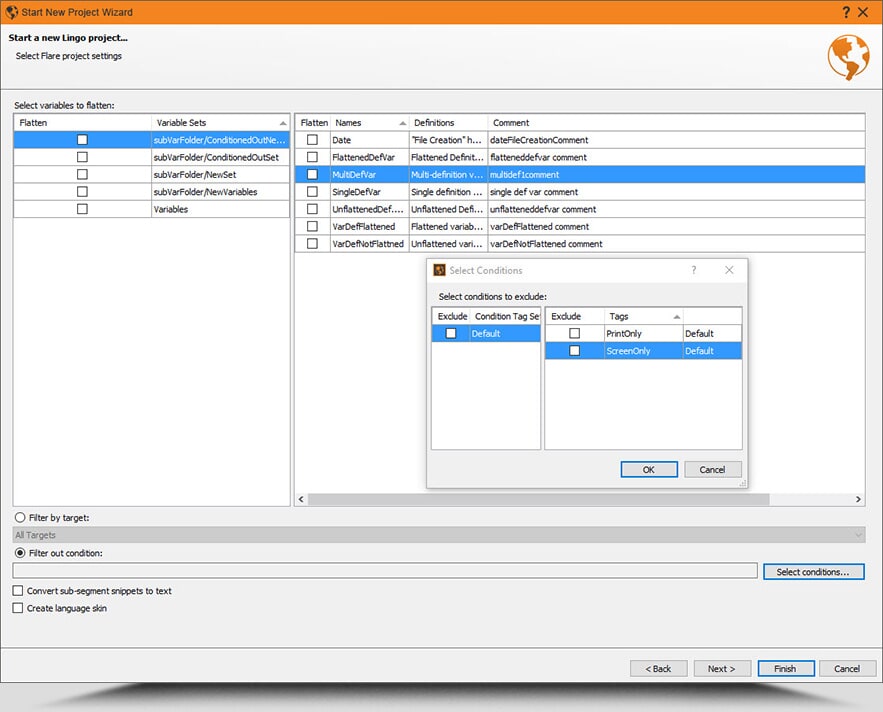 In MadCap Lingo 10, you can now flatten text elements such as snippets (chunks of content) and variables (such as company name, date, product version, etc.), allowing for cleaner source language translations. When you start a new Lingo project, you’re prompted with a dialog that gives you the option to select variables to flatten. This is useful for authors who want to make things easier on translators, who may need to see variables in context and rendered as plain text.

Need to select different snippets or variables to flatten during the course of a project? MadCap Lingo 10 gives you the flexibility to pick and choose which to flatten, when you need it. There’s no need to start an entirely new project; you can now go in and dynamically switch whether or not you want to flatten a particular snippet or variable.

In the past, we’ve been able to translate MadCap Flare and DITA files within MadCap Lingo. With the new version, MadCap Lingo’s DITA translation capabilities have been further expanded and improved for users who want to translate DITA files. One of the new changes is the filtering option with DITA content; we can now look at your DITA content and apply the same dynamic filtering features available with Flare projects. This feature allows you to filter out by the DITA attributes (such as Props, Platform, Product, Audience, and Other props) so that you can send over what needs to be translated, saving valuable time and effort.

In addition, flattening can now be used for DITA content. Content references can be flattened, similar to that of snippets within Flare. This feature allows you to flatten the conrefs in your DITA content so that they can be seen in context as plain text.

New element types are also supported for translation as well, such as: 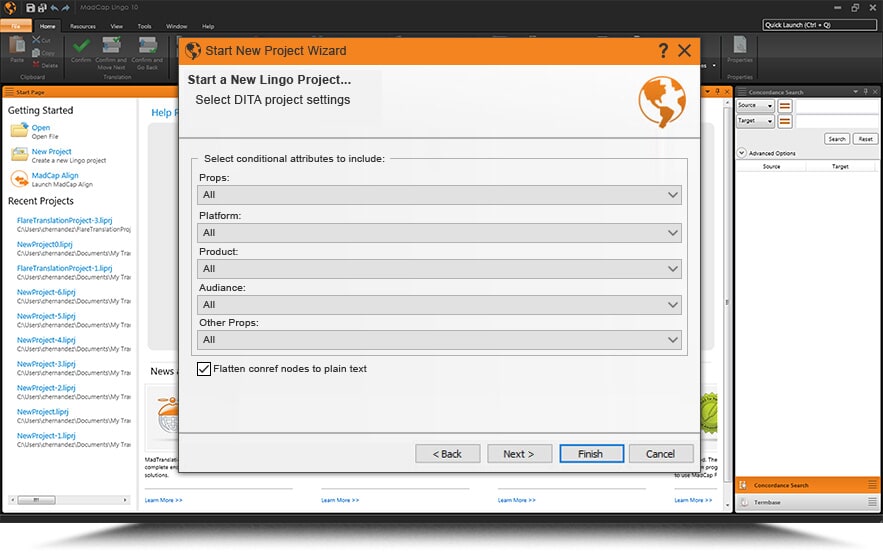 One of my favorite changes in the new version is the improved multilingual output workflow. With Flare 12, we added a feature that would allow users to add a multilingual output, creating a single output that includes all different languages. On the project side, Flare automatically updates so you can point languages directly to your MadCap Lingo project within that project dialog. You no longer have to export every single language! Users also have the ability to sync any updates or new changes made in a Flare project to MadCap Lingo, further streamlining the workflow to create multilingual outputs from Flare projects.

While these are just some of the biggest updates that come with MadCap Lingo 10, there’s also a ton of new additional features, such as 64 bit support, command line options, and batch image replacements. Learn more about the latest features of MadCap Lingo 10 here, or feel free to reach out to me with any questions! 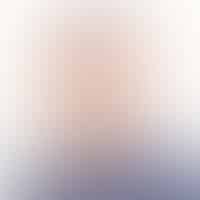 Justin Bondoc, Sales Engineer II, started at MadCap Software as a technical support engineer and turned to the evangelism team to promote the value of MadCap Software’s products and services to the community. In addition to spending his time educating potential and existing customers about all things MadCap Software, Justin likes listening to hip-hop, tackling his next art project, and exploring his creative side.